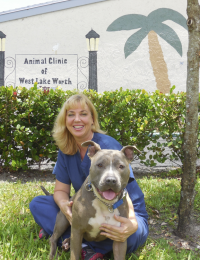 Dr Stephanie’s father retired the family to a hobby farm in North Carolina, after 32 years of service in the United States Air force. It came as no surprise to her family when she announced she intended to become a veterinarian. After attaining an undergraduate degree in Animal Science from North Carolina State University, she headed up to the University of Prince Edward Island, PEI Canada, for veterinary college. Following graduation in 1998 she moved to South Florida, where she’s been enjoying the tropical climate ever since. As a relief vet, Dr Stephanie has practiced in over 30 veterinary hospitals in Palm Beach, Broward, and Dade counties. She joined the Animal Clinic of West Lake Worth family in 2008. She has three rescued dogs that frequently come along with her to the clinic.

Thank you for considering our hospital as your pet’s provider of veterinary services. Fill in this form to save time in the waiting room on your first visit.

Animal Clinic of West Lake Worth is pleased is to provide a library of professionally written articles updated by practice experts.